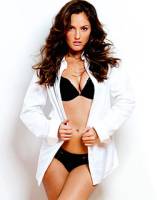 Minka Kelly says she didn't have anything to do with the end of Jesse Williams' marriage.

The actress began dating the 'Grey's Anatomy' star this summer, just months after his 5-year marriage to Aryn Drake-Lee had ended.

That timeline gave rise to rumors that Williams may have cheated on his wife with Kelly while they were still married.

However, Minka Kelly tried to shut down those rumors on Thursday after a fan asked: "I hope the cheating rumors aren't true. It would be disappointing."

"They're not. Hate for you to be disappointed," Kelly fired back. "Glad I could clear that up for you. Now f--k off."

Williams had previously implied he didn't cheat on his wife because he wouldn't have thrown a "person and my family in the trash because a girl I work with is cute."