Minka Kelly and Derek Jeter Split Up After Three Years 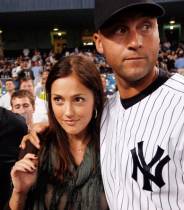 Minka's representative have confirmed the news to People magazine.

Although a source says "they care about each other and it was amicable."

The 31-year-old actress, who has been filming ABC's 'Charlie's Angels' reboot in Miami, was at Yankee Stadium last month when Jeter launched his 3,000th career hit into the bleachers.

With the pair broken up, Jeter will no doubt add to a dating roster that has previously included Mariah Carey (photos