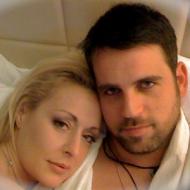 Mindy McCready has had her share of troubles in the last few years but she's denying having anything to do with boyfriend David Wilson's death after he died of a what appeared to be a self-inflicted gunshot wound.

McCready opened up about the tragedy in an interview with NBC's Dateline.

Calling Wilson her "soul mate," she added, "He didn't just touch my heart, he touched my soul."

When flat-out asked whether she shot him over an affair, as has been rumored, McCready replied: "Oh my god, no. Oh my god, no."

"He was my life. We were each other's life. There's no way to tell where one of us began and the other ended. We slept together every night holding hands."

Although she admitted they had fights and said: "People have fights -- it's just like normal couples."

"David was not having an affair with another woman," she insisted. "That is absolutely, totally untrue. Neither one of us have ever cheated on each other and would never do that. That is absolutely a lie."

When asked whether she believed "100 percent" that Wilson killed himself or whether he might have been murdered, the singer fell silent and only said: "I don't know."

Pressed further, the singer admitted she didn't know because "I don't understand why he would leave us."

McCready did not attend a January 19 memorial for Wilson in Fayetteville, Arkansas.

"I think that a bunch of David's friends got together and got drunk in memory of David," she explained, "not something appropriate for me and my children to be a part of."

McCready and Wilson had been living together with the couple's 9-month-old son and her 6-year-old son from a previous relationship.