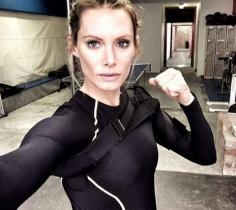 Milla Jovovich is asking her fans to pray for Olivia Jackson, after the stuntwoman had a serious accident while filming a scene for 'Resident Evil: The Final Chapter'.

"I sit down to write this post with a heavy heart, because a terrible accident rocked our set," she writes on Facebook.

"My incredibly talented stunt double, Olivia Jackson, collided with a camera crane while performing a motorcycle stunt and it put her in the hospital with severe, multiple injuries."

The 32-year-old suffered severe head injuries and a punctured lung after colliding with a metal camera arm during a high-speed motorcycle chase in South Africa. While it hasn't been confirmed, it's being reported that she has been placed in a medically induced coma.

According to a source on set, the accident occurred because the metal camera arm "malfunctioned and didn't lift up."