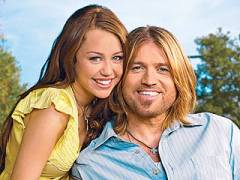 With all the recent revivals and reboots, Miley Cyrus (photos

) was asked if she would considering doing more episodes of 'Hannah Montana'.

But the actress-singer says she's not interested in doing more episodes because it would mean spending time with her dad, Billy Ray Cyrus, again all day, everyday.

"I probably wouldn't do it," she said on 'The Zach Sang Show'. "It's a lot of time to be spent with my dad. You know, my dad was my dad on the show. I have enough dad time."

"That was really hard every day from, like, 11 to 18," she explained. "I didn't get a school escape like most people."

"I went to work with my dad. And then I started driving my dad toward the end, when I could start driving. And then my grandma went with me every day. It was a lot of time with dad and grandma."

"That's why, as soon as I turned 18, you guys wonder why I was twerking at Juicy J shows," she laughed. "I had just spent 10 years every day with my dad and grandma! I had to break free."