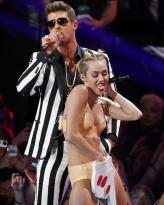 ) is returning to the MTV Video Music Awards but this time as a host.

In a message announcing the gig to her fans, Miley jokes: "MTV won't let me perform... so I'm hosting this year's VMAs."

You'll recall the 25-year-old singer made headlines in a previous appearance after provocatively twerking with Robin Thicke and performing with a giant foam finger.

Last year she brought along a homeless date, Jesse Helt, to accept her award for Video of the Year for 'Wrecking Ball'.

The 2015 MTV Video Music Awards will air from the Microsoft Theater in Los Angeles on August 30.