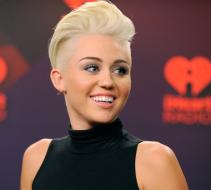 ) and Liam Hemsworth didn't officially end their engagement until this month but the singer says she thought about ending the relationship months ago.

"I wrote it while I was working on Valentine's Day—emotionally it was such a hard time," she tells Fashion magazine about her single 'Drive'.

"It is about needing to leave someone but not really wanting to completely cut yourself off from the relationship. It's a time when you want to leave but you can't. It's also about moving on."

The singer also talks about her style and her much talked about MTV Video Music Awards performance -- which she claims came across tamer on TV.

"I was trying to slap Robin's ass but no one saw it! Believe me! MTV edited so much," she says. "They cut almost everything I did. I'm proud of that performance. I feel like music is really stale right now."

"I was hoping some would think, 'Miley may be out there shaking her ass and having fun but she's got some intelligence.'"

"I feel like I'm in a different lane now," she explains. "When it comes to critics, I have my blinders on and I don't really feel like I have to compete with other pop artists."

"I have a very specific style of my own, and I think it is better to be stylish than trendy."

"I never think, 'Oh, this performance is going to make her look bad or out-shadow her' either, but if there is no competition, there would be no reason for any of us to show up to work. At an office, everyone is trying to be boss. Pop music is the same. What I wear adds a factor that other girls can't compete with."