Miley Cyrus: I Was Bullied, Lonely & Miserable Before 'Hannah Montana' 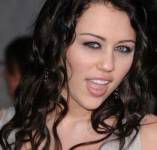 ) may be the teen queen, but in her new memoir, 'Miles To Go', the singer/actor says it wasn't always that way.

The 'Hannah Montana' star says she was 'friendless, lonely and miserable' because of the bullying she received from the 'Anti-Miley Club' growing up in Tennessee: "The girls took it beyond normal bullying. These were big, tough girls," Cyrus says in the book. "I was scrawny and short. They were fully capable of doing me bodily harm."

Cyrus recalled one particular incident: "They shoved me in the restroom. I was trapped. I banged on the door until my fists hurt. Nobody came. I spent what felt like an hour in there, waiting for someone to rescue me, wondering how my life had gotten so messed up."

"It seemed like Operation Make Miley Miserable was escalating to a new level. More like Operation Take Miley Down. Three girls strutted up and stood towering over me. My stomach churned. I clutched my grilled cheese sandwich like it was the hand of my best friend. It pretty much was my best friend those days. I was done for."

"They started cussing me and telling me to get up. I sat there, frozen. I didn't know what to do. Finally, I couldn't take it anymore. I wasn't chicken. What could they do to me? I was surrounded by people. I stood up, still a foot shorter then they were, and said, 'What's your problem? What did I ever do to you?'"

"Classmates would say, 'Your dad's a one-hit wonder. You'll never amount to anything -- just like him,'"

Cyrus says she had to work hard to get the role of 'Hannah Montana': "I didn't dare forget the struggle. There was a reason for it. I brought that girl with me, and she reminds me to be compassionate. To not hold grudges. To be supportive. To be there for others when I know I'm needed."

Miley who describes ex-boyfriend Nick Jonas as 'Prince Charming' in the book, still sounds surprised that their relationship didn't last: "It felt like the whole world stopped. Nothing else mattered," she says of meeting him.

"Deep down, I know we weren't being our best selves," she says of their time together. "And that was what I wanted — and thought I deserved — in a relationship."

"It's hard to imagine that our love is a story with an end. But you know, at least I'm getting some really good songs out of it," says of the song '7 Things I Hate About You' she wrote after the break-up in order to 'punish him for hurting me.'

Her book comes just in time for her movie, 'Hannah Montana: The Movie', which opens on April 10.