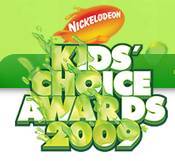 ) made sure the tradition stayed alive.

This after Miley scored a win for Favorite Female Singer. Cyrus said she thought she was going to lose, even though she took home the award last year and got surprisingly choked up.

"I really thought I was going to lose, so thank you guys. I'm so excited. I know this isn't like the Oscars, but it's still amazing because unlike any other awards show, it's all because of you guys," said Cyrus, referring to her fans.

Check the complete list of winners, and a clip of Miley Cyrus crying at the awards show below:

Complete list of winners at the 2009 Kids' Choice Awards: