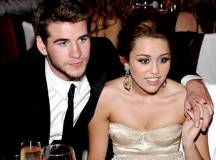 ) and boyfriend Liam Hemsworth have split after more than a year of dating.

The 17-year-old met Hemsworth on the set of their film as the two played young lovers. However, the couple appears to have sung their 'Last Song', for now.

The actors had been shooting down breakup rumors for months. In fact, in June, Miley took to posting a message on her web site to assure fans that they were "so happy."

"I'm not really a big lovey person. I'm not, like, mushy. But Liam was the first person that made me want to be in a real relationship," she told 'People' magazine in April.