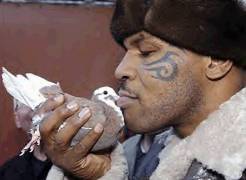 Ford has tried to play the "nobody's perfect" narrative often since admitting to smoking crack and having a drink problem.

And on Tuesday, after a 45 minute meeting in the mayor's city hall office, he also managed to convince Tyson.

After the meeting, Tyson called Ford "the best mayor in Toronto's history" as he insisted that public figures deserve the same understanding and second change he's received.

"We all make mistakes," Tyson said. "He's overcome adversity with 24-hour surveillance by everyone. He's a human being. We have no idea what you do behind closed doors, what your habits are."

"We're cut from the same cloth," Ford said of Tyson, who was once convicted of rape and pled guilty to cocaine possession and driving under the influence. "There's no nonsense. I respect him."

When asked about Tyson's past, Ford dipped back into the well.

"And you guys are perfect?!," he asked reporters.

Ford is currently embroiled in a mayoral election campaign in which rivals have accused him of turning city hall into a "circus" and a "laughing stock."