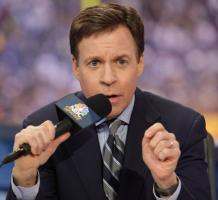 After anchoring broadcasts of almost a dozen Olympics, Bob Costas is stepping down as host of NBC's primetime Olympics coverage.

Costas will be replaced by Mike Tirico, who will make his debut at the PyeongChang Olympics in 2018.

"It has been both a privilege and an incredible personal and professional experience to have been part of NBC's Olympic coverage all these years," Costas told reporters in a conference call.

"We built into the deal what they were kind enough to call the 'Brokaw clause,' where I would be to sports roughly what Tom Brokaw was to news. I’m flattered by the comparison."

The sports announcer, who has been in the business for four decades, first served as NBC's late evening Olympics host for the 1988 Seoul games.

"I'm not retiring, I'm just transitioning," he said. "It's always better when they leave the decision to you."

"It's better to leave before they start to drop hints like, 'Do you think it might be a good idea? Are you getting tired yet, can we help you up the steps, or do you need another cup of Ovaltine, sir?,'" he joked. "I didn't want it to get to that point. So this was entirely on my terms, and I like it that way."