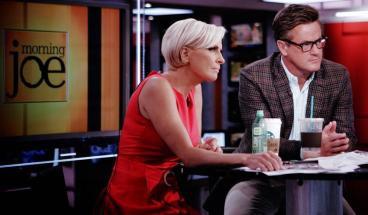 Mika Brzezinski responded to Donald Trump's vicious tweets directed at her on Friday but now the 'Morning Joe' is revealing further details about their meeting at Mar-a-Lago in December.

In an interview with Vanity Fair, Mika says Trump may have mocked her alleged "face-lift" on social media.

But the President was so impressed about the procedure to tighten the skin under her chin and neck that he repeatedly asked for her doctor.

"I said … 'Shit. I kind of wanted to keep that to myself,'" she says jokingly about her reaction to the tweet, explaining it had never been a secret and she had been telling everyone about the procedure herself.

"I had a turkey neck. My mom told me to get it done," she explains. "I was FaceTiming all my friends, telling them to get it done, that it wasn't so bad."

Mike says she told Melania Trump about the procedure when they met but Trump had more questions than she did.

"The irony of it all is that Donald kept saying, 'That's incredible. You can't even tell. Who did it? Who did it?’ He kept asking for the name of the doctor. He literally asked 10 times. 'Is he down here? Who is he?'"

It wasn't the first time Trump has attacked on social media. Last summer, he described her as "a neurotic and not very bright mess!"

However, after a meeting arranged by Jared Kushner at the time, he apologized.

"Jared said we should end the meeting right then and there, because it was one of the only times he had heard him apologize," Joe Scarborough says.

This time neither of them is holding their breath for an apology.