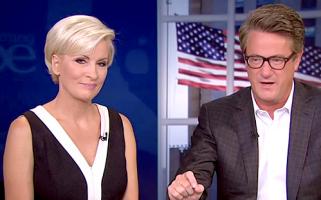 "I heard poorly rated Morning Joe speaks badly of me (don't watch anymore). Then how come low I.Q. Crazy Mika, along with Psycho Joe, came to Mar-a-Lago 3 nights in a row around New Year's Eve, and insisted on joining me," Trump railed on social media Thursday. "She was bleeding badly from a face-lift. I said no!"

However, along with expressing their disgust for the attack, Brzezinski and Scarborough that's not at all what happened.

"Mr. Trump claims that we asked to join him at Mar-a-Lago three nights in a row. That is false. He also claimed that he refused to see us. That is laughable," they say.

"The president-elect invited us both to dinner on Dec. 30. Joe attended because Mika did not want to go. After listening to the president-elect talk about his foreign policy plans, Joe was asked by a disappointed Mr. Trump the next day if Mika could also visit Mar-a-Lago that night."

"She reluctantly agreed to go. After we arrived, the president-elect pulled us into his family's living quarters with his wife, Melania, where we had a pleasant conversation. We politely declined his repeated invitations to attend a New Year’s Eve party, and we were back in our car within 15 minutes."

"Mr. Trump also claims that Mika was 'bleeding badly from a face-lift'. That is also a lie," they continue.

"Putting aside Mr. Trump's never-ending obsession with women's blood, Mika and her face were perfectly intact, as pictures from that night reveal. And though it is no one's business, the president's petulant personal attack against yet another woman's looks compels us to report that Mika has never had a face-lift."

The pair, who were supposed to be on vacation for the holiday weekend, returned to their morning show on Friday for a brief segment

"We're okay. The country is not," said Scarborough.

Brzezinski called Trump "fragile and impetuous" with a "child-like ego".

However, the harshest comments of the program came from co-host Donny Deutsch.

"Obvious vulgarity, obvious stupidity. Enough is enough. Beyond the stupidity of it. You're a pig! You're a bully! I'm taking the low ground here," he admitted. "It's time we stop tippy toeing."

"He's not well. This is the man who's got his hand on the codes. He's obviously not well."