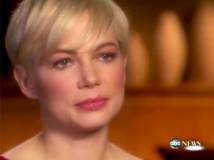 Michelle Williams isn't happy that her ABC interview focused on Heath Ledger as much as it did.

Williams says she was particularly upset because the portion of the conversation that got the most airtime was on the death of Heath Ledger.

"They used those few quotes, and the way they edited the piece to sell the interview, it appeared as if I were breaking some kind of silence and sitting down with the express purpose to discuss something that is very private to me."

"I experienced a lot of loss after his death," laments the actress. "I lost my city because of all the paparazzi descending upon us. I actually lost my journal during that time, oddly enough."

"I literally couldn't hold on to anything. It felt as if things were literally slipping through my fingers. Things were just streaming away from me. I lost my sense of humor. I'm still looking for that."