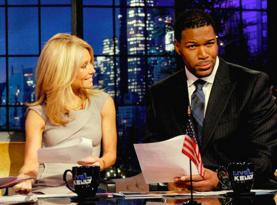 'Live!' is expected to announce its new co-host two weeks from now but, according to multiple sources, producers have already chosen Michael Strahan to take over Regis Philbin's chair and co-host with Kelly Ripa (photos

Strahan, 40, a former NFL star and currently a host of 'Fox NFL Sunday' has been in negotiations with 'Live!' after appearing on the program several times since Philbin's retirement.

Seth Meyers from 'Saturday Night Live' and singer Josh Groban were also in the running for the job. In fact, Ripa has hosted with 59 guest co-hosts since the chair was vacated in 2011.

Strahan is expected to keep working at Fox's popular NFL pregame program since that won't interfere with his duties at 'Live!', if he can keep up with the travel. 'Live!' shoots in New York City while the Fox show is produced out of Los Angeles.

'Live' had been hoping to make the official announcement on the September 4 broadcast, with Strahan and Ripa on set together.