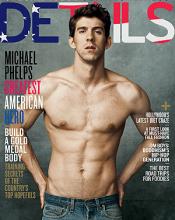 Michael Phelps says the leaked photo of him inhaling from a marijuana pipe not long after the Beijing Olympics was a "learning experience."

The photo prompted one of the swimmer and 16-time medalist's longtime sponsors, Kellog, to drop him and he was suspended from competition for three months by USA Swimming.

"It was a learning experience," Phelps tells Details magazine. "I'm the kind of person who has to go through the learning experiences myself. Somebody could tell me, 'If you eat this much you'll be fat,' and I'd be like, 'Yeah, okay, let me try it.'"

"Growing up, my mom taught us to make our own decisions, but also that you have to pay for the consequences of those decisions. I'm thankful for that. I'll be the first to say I've made thousands of mistakes, but I've never made the same mistake twice."

Phelps, who will compete in the London Olympics, says he's hoping for a career-capping run.

"I've always said I wouldn't swim past 30," he noted. "I don't want to be that guy who's hanging on, but I want to reach my max potential. I don't care how much pain I have to go through or the sacrifices I have to make. I'll get it."

Although he wasn't always sure he would compete after racking up a record eight gold medals at the Beijing Olympics in 2008.

"It was weird going from the highest of the high, the biggest point of your life -- winning eight gold medals -- and then saying, 'All right, where do I go from here?' I wasn't motivated. I did nothing, literally nothing, for a long time," he recalls.

"I gained 25 pounds. A friend of mine and I were playing football on the beach in Miami, and somebody got a picture of us and put it all over the place. And he's like, 'Bro, you gotta start working out, man. You are fat.'"

"So I started going through the motions again. I would go back for a week or two and then stop. I'd show up for dry-land practice and then just sneak out the back door so nobody saw me."

"I was watching Rocky II the other day -- the one where he's fighting Apollo for the second time and he's just going through the motions," he adds. "It reminded me of how I was."

"I realized that I probably hadn't reached my full potential," says Phelps. "There was still more in the tank. As I come to closure on my career, am I going to look back in 20 years and say, 'What if?' That's something I don't want."