Michael Phelps is apologizing after a photo showing the Olympic champion inhaling from a marijuana pipe appeared in a British newspaper over the weekend.

Phelps, who won a record eight gold medals at the Beijing Games, acknowledges it was him and doesn't dispute the authenticity of the picture: "I engaged in behavior which was regrettable and demonstrated bad judgment."

"I'm 23 years old and despite the successes I've had in the pool, I acted in a youthful and inappropriate way, not in a manner people have come to expect from me. For this, I am sorry. I promise my fans and the public it will not happen again," says Phelps.

The US Olympic Committee is also taking a bit of heat, since he was recently selected their sportsman of the year: "Michael is a role model, and he is well aware of the responsibilities and accountability that come with setting a positive example for others, particularly young people," says the USOC in a statement. "In this instance, regrettably, he failed to fulfill those responsibilities."

The picture was taken during a recent house party when Phelps was visiting the University of South Carolina. The paper quoted a partygoer who said the Phelps was "out of control from the moment he got there."

Marijuana is banned under World Anti-Doping Agency rules, however, Phelps has never tested positive for banned substances and there shouldn't be any concern since WADA sanctions only for a positive test that occurs during competition periods. What an athlete does during their private time is their own business.

See 'News of the World's Michael Phelps' drug photo below: 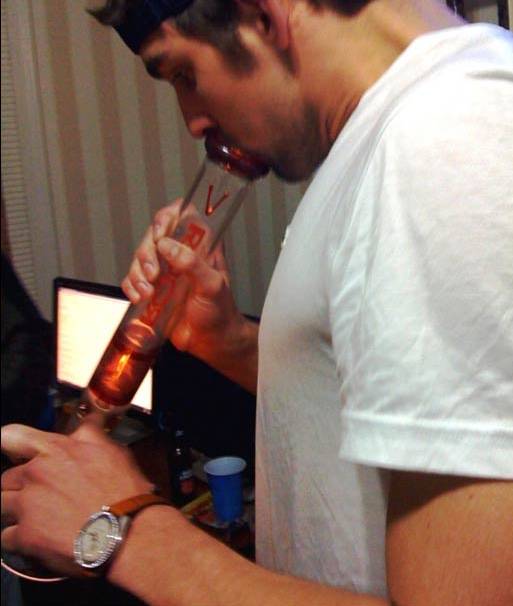