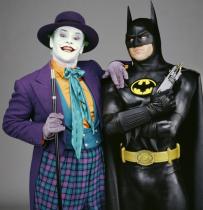 Michael Keaton talks about making 'Birdman' and tells stories about what it was like to work with Jack Nicholson on 'Batman'.

Keaton invited Nicholson for a screening of 'Birdman' after the pair developed a friendship while he played the caped crusader.

"That is unbelievable that we can't find peace in the Middle East and yet Batman and the Joker go to each other's movie screening," said Jimmy Kimmel.

"It was really practical about how he worked. He explained his lifestyle... which wasn't anything like my lifestyle," Keaton said with a chuckle.

"And they said 'Well, that makes sense. You need your sleep. You've been out all night.' It was an arrogant thing at all. It was just very reasonable."

Keaton also told another story about how much of a sports fan Nicholson was even in those days.