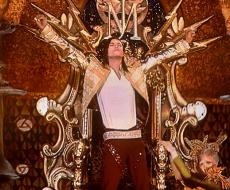 Michael Jackson's hologram made a special appearance at the 2014 Billboard Music Awards on Sunday night.

It took a court order to clear the way for an appearance by the hologram but the image of a dancing Jackson was enough to bring some watching to tears while others were either amazed or disgusted by the King of Pop's video projection.

The holographic image of Jackson sang 'Slave to the Rhythm' from his second posthumously released album 'Xscape'.

Producers built a special stage at the rear of the MGM Grand Arena that was used only for the Jackson performance.

"We knew we didn't need to go so far left field with his dance moves -- we just kept it within his world," explains choreographer Rich Talauega. "Its just the way you reconfigure his steps so it looks different."

Catch a glimpse of the performance below: