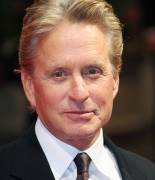 Michael Douglas says he faces an "eight-week struggle" against throat cancer but is optimistic about his chances for recovery.

In an appearance with David Letterman, the 65-year-old actor revealed he had just finished his first week of radiation and chemotherapy.

"You've never looked better to me, and this proves that you're a tough guy, for God's sakes," the talk show host said.

Douglas, though seemingly thinner, sounded like his normal self and boasted a thick head of white hair.

When Letterman wondered why he still sounded the same, he joked: "Because I'm on stage. Because Kirk would you know, he'd say, 'Son, you gotta look good. You never know when you might have cancer.'"

"Believe me," he added, gesturing downward, "this is the first week and the progression goes down."

He said he was diagnosed three weeks ago with Stage 4 cancer after realizing something was wrong early this summer when he came down with a "really sore throat." A biopsy found he had late, stage-four cancer, "which is intense, and so they've had to go at it... it knocks you out really hard."

When Dave asked if the doctors found the cancer "earlier enough for their liking," Douglas replied, "I sure as shit hope so."

Douglas explained throat cancer was caused by alcohol and drinking, and admitted to having done both. But the cancer hasn't spread below the neck, "so nothing's gone down, and the expectations are good."

"I would hate to say it but right now, it looks like it should be 80 percent," he said, "and with certain hospitals and everything, it does improve... the percentages are very good."

"Ahh, give me a hug," Douglas responded. The host complied as the audience gave a standing ovation.