Michael Douglas and Catherine Zeta-Jones Back Together For 15th Anniversary 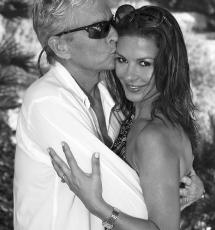 Two years after they separated, Michael Douglas and Catherine Zeta-Jones appear to be officially back together.

Catherine Zeta-Jones posted a photo of her and Douglas on her social media page this week to celebrate the couple's 15th wedding anniversary.

"Happy Anniversary dearest Michael!" she wrote along with an old photo. "Loving our life together, here's to the next 15!"

Douglas returned the wishes with a photo of his own from the past as well as a current picture.

"15 Years ago and today... Happy Anniversary Catherine!" he wrote.

Douglas, 71, and Zeta-Jones, 46, married on November 18, 2000. The pair separated in 2013, following Douglas' comments that too much oral sex may have given him throat cancer.

They reunited in 2014 and Douglas had also expressed hope they were back together but this is the first public acknowledgement from Zeta-Jones.