Slain Teen Michael Brown's Parents: 'We've Been Disrespected All The Way Around' 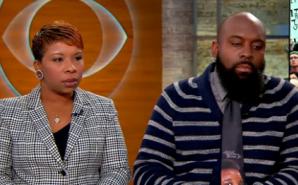 In an interview on 'CBS This Morning', Michael Brown, Sr. and Lesley McSpadden, the parents of slain teenager Michael Brown, discussed the grand jury's decision not to indict Officer Darren Wilson and said they had been "disrespected all the way around."

"I don't believe a word of it," McSpadden said of the officer's testimony that claimed his threw the first punch.

Brown's parents said they are still waiting for Ferguson officials to extended their condolences since their son's passing.

"Ferguson has never come to me and even gave a condolence to me. Nothing," said McSpadden. Her husband added, "We've been disrespected all the way around."

The family said they couldn't take the blame for the protests and riots: "We continue to ask for calm and we continue to get out there and protest with them in a peaceful manner."

As for what they wanted to see happen again, Brown said: "Change. That's all we're asking for. We actually don't accept our son is gone, but we're dealing with it. There are other families that went through the same situation, and we all just want change all over."