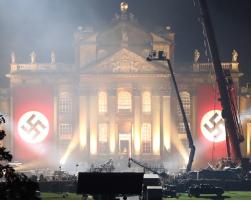 Michael Bay is defending the addition of Adolf Hitler and Nazi's to 'Transformers: The Last Knight'.

This after the film turned historic Blenheim Palace into a headquarters for Hitler. Huge swastika flags were draped with military equipment carrying the Nazi trademark at the mansion, the birthplace and ancestral home of Sir Winston Churchill.

Tony Hayes, of the UK's Veteran's Association, said those who fought in World War Two were "appalled" by the production.

The plot of the movie is thought to revolve around a successful Nazi plot to invade Britain.

"I just want to say, people were not fortunate enough to read the script, and they don't know that Churchill in this movie is a big hero," Bay tells the BBC."

"When you see the movie, you'll understand. I for one, probably more than any director in the world, have shot more veterans and more active military men and women in my movies. I would do nothing to disrespect veterans."

Star Mark Wahlberg has also hinted that, along with the Autobots and Decepticons, the film will also include an appearance by the Dinobots.