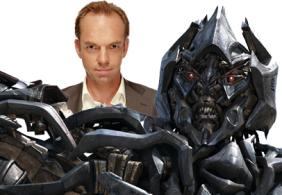 In a post on his website, which he later deleted, Michael Bay slammed Hugo Weaving, the voice of Megatron, for saying that doing the film was "meaningless" to him.

"It was one of the only things I've ever done where I had no knowledge of it, I didn't care about it, I didn't think about it," Weaving said in an interview.

"They wanted me to do it. In one way, I regret that bit. I don't regret doing it, but I very rarely do something if it's meaningless. It was meaningless to me, honestly. I don't mean that in any nasty way. I did it."

"But, my link to that and to Michael Bay is so minimal. I have never met him," he continued. "I was never on set. I've seen his face on Skype. I know nothing about him, really. I just went in and did it. I never read the script. I just have my lines, and I don't know what they mean. That sounds absolutely pathetic! I've never done anything like that, in my life. It's hard to say any more about it than that, really."

But hearing that much was enough to set Bay off on the actor.

"Do you ever get sick of actors that make $15 million a picture, or even $200,000 for voiceover work that took a brisk one hour and 43 minutes to complete, and then complain about their jobs?," Bay asked in a post.

"With all the problems facing our world today, do these grumbling thespians really think people reading the news actually care about trivial complaints that their job isn't 'artistic enough' or 'fulfilling enough?'"

"What happened to people who had integrity, who did a job, got paid for their hard work, and just smiled afterward? Be happy you even have a job - let alone a job that pays you more than 98% of people in America."

Bay didn't refer to Weaving by name but there was no doubt who the post was about.