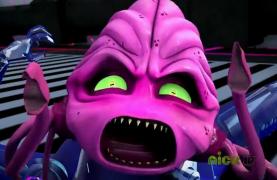 But Michael Bay has confirmed that 'Out of the Shadows' will also provide Leonardo, Donatello, Raphael and Michaelangelo's first encounter with Krang.

This after Bay said during his '13 Hours' promotional tour that he worked with a visual-effects supervisor Pablo Helman to create a version that didn't look like the cartoons.

"He could have some tentacles," says Bay. "I just don't want them coming out of the side. He looks like a stupid octopus."

'Teenage Mutant Ninja Turtles: Out of the Shadows' is scheduled for release on June 3, 2016.

Bay has also announced that he will be returning to the director's chair for another 'Transformers'. He insists, just as he did before, that this will be his last film in the franchise.

"Transformers, I still have a great time," he adds. "It's fun to do a movie that 100 million people will see. But this is the last one. I have to pass the reins to someone else."

Mark Walhberg, who starred in 2014's Transformers: Age of Extinction, is also expected to return.