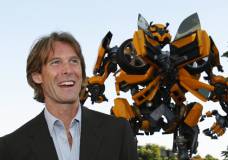 Michael Bay has confirmed he's signed on to direct 'Transformers 4'.

Bay has signed a two film deal with Paramount Pictures that will see him first direct 'Pain and Gain', which follows a group of bodybuilders who become tangled in a campaign of kidnapping, extortion and murder, followed by the next installment in 'Transformers' franchise.

Producer Lorenzo DiBonaventura, who will also return, says they are going to do a reboot with the upcoming film but try to maintain the continuity at the same time.

"I think we really are going to do a reboot there. What that's going to be, we don't even know yet. We gotta get a story first. You can't pick characters until you have a story," he says. "It's a funny thing, it's not what I perceive Spider-Man to be is just a redoing of the whole thing. It's not that. It's an evolution, there's still continuity that's going on."

"It's a hybrid because there's still continuity going on, and there will be a lot of new cast. Whether there's anybody from the first cast, we don't even know yet."

"The truth is, there's going to be a whole new story. But the characters that would certainly come along would be Optimus and Bumblebee, I'm sure."

The third film, 'Transformers: Dark of the Moon', earned over 1.1 billion dollars worldwide. Paramount has given the upcoming installment a release date of June 29, 2014.