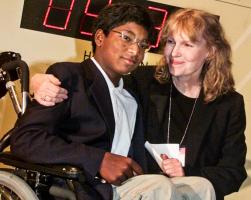 Mia Farrow and the rest of her family are understandably shocked after her 27-year-old paraplegic son fatally shot himself in his car along a Connecticut road.

Thaddeus Wilk Farrow was found with a self-inflicted wound in the torso, roughly 8 miles from his mother's home.

He was transported to Danbury Hospital by ambulance, where he died.

Following an autopsy, the medical examiner's office determined the cause of death was suicide and ruled out any criminal element.

"We're devastated by the loss of Thaddeus, our beloved son and brother. He was wonderful, courageous person who overcame so much hardship in his short life. We miss him. Thank you for the outpouring of condolences and words of kindness," the actress said in a statement.

Thaddeus was one of Mia Farrow's ten children she adopted through the years. He was paralyzed from the waist down due to polio during his younger years.