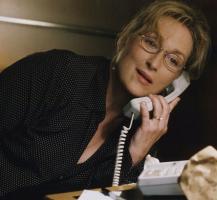 The Oscar winner will star in the second season of the HBO series, alongside Nicole Kidman (photos

Skarsgard won a Golden Globe last week for his portrayal of the abusive husband of Kidman's character, Celeste.

Spoiler alert if you haven't finished the first season for what's to follow.

Streep's character will be "concerned for the well-being of her grandchildren following her son Perry's death," HBO teases. "Mary Louise arrives in Monterey searching for answers."

'Big Little Lies' season two is not expected to air until next year.

The series has earned the Emmy, Golden Globe and Screen Actors Guild awards as best series.