Melissa Rivers: Kathy Griffin 'Sh-t All Over My Mother's Legacy' 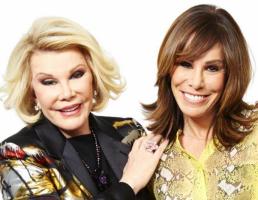 In an interview with Hoda Kotb on this week, Rivers blasted the comedian when the topic of 'Fashion Police' came up.

Kathy Griffin replaced her mother, Joan Rivers, on the show only to leave two months later, citing "body criticism" and a joke that Giuliana Rancic made about Zendaya's Oscar dreadlocks.

"I'm just going to say it wasn't a match on a lot of levels," Melissa said.

"My biggest complaint was the feeling that she kind of sh*t all over my mother's legacy in her statement on leaving. And I know that was not an intentional reading of it, but that's how I felt."

"But I know that wasn't how it was intended."

"Everything was so heightened and everybody was so crazy, but that was my takeaway by her calling the comedy and the style of it old-fashioned."

"I understand what you're doing — you're trying to save yourself, but don't crap all over my mother to do it, and that's how I felt."

"They took the last thing I had and smashed it," she said.

She then added her mother may have "a little twinkle in her eye, saying, 'You all couldn't do it without me, could you?'"