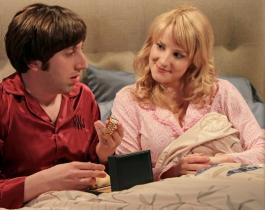 'Big Bang Theory' star Melissa Rauch tells Conan O'Brien how her trying to stay warm under the covers looked like "she was having way too much fun."

"We were shooting a scene and I am supposed to be in a hotel room bed," Rauch explains the scene in the season premiere. "And in my personal life, whenever I under the covers, I'm always really cold so I tend to pull the covers really high and just leave my head out and I kind of warm up my hands like I'm a boy scout starting a fire with sticks or something."

"So I'm under the covers and it's really cold on set. And out of habit I'm doing this under the covers. We shot the whole scene and after the scene is cover my director and producer came over and said 'We need to see your hands in the next take. It looked like you were having way too much fun with yourself under the covers.'"

"And after the show I was talking to some people in the audience and this little boy said to me 'Did you shoot that scene with your hands out 'cause it looked weird? Because my dad said it looked real weird.'"

Rauch said she called her mom to tell her and she was "mortified".

"I hope people understand that you weren't really doing that," the actress impersonated. "That's disgusting."