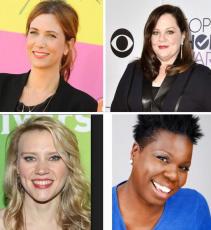 The cast for the upcoming all-female 'Ghostbusters' reboot appears to be set with Melissa McCarthy, Kristen Wiig, Leslie Jones and Kate McKinnon.

While some of the women still have to sign on the dotted line, deals are almost finalized for them to star in Paul Feig's reboot of the 80s movies starring Bill Murray, Dan Aykroyd, Harold Ramis, and Ernie Hudson.

Bill Murray is being courted to make a cameo in the film as one of the few central male characters.

Murray's lack of interest in returning to the role had been a sticking point for previous attempts to continue the franchise but this would be an entirely new character.

Paul Feig has since confirmed the casting by sharing the photo we have on the right along with an official release date for the film of July 22, 2016.