Mel B Claims Husband Stephen Belafonte Cheated On Her With Nanny 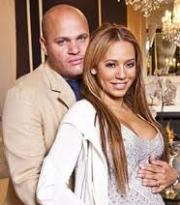 Mel B, who was granted a restraining order against estranged husband Stephen Belafonte following her claims of abuse, says he also cheated on her with their nanny.

The singer and 'America's Got Talent' judge claims Belafonte hired German exchange student Lorraine Gilles to be their nanny in 2010 and soon began having an affair with her.

Brown says in 2014 Belafonte told her Gilles was pregnant but rather that end it "He wanted her to have the baby and all three of us live together."

She has said she attempted to leave her husband many times, however, "he threatened to release sexually explicit videos, claiming I would never work again."

A judge recently denied her request to recover alleged sex tapes currently in the possession of her estranged husband.