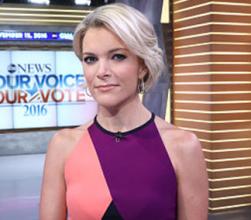 Megyn Kelly is set to interview Vladimir Putin as she moderates the plenary session of the St. Petersburg International Economic Forum on stage with Russian President.

"The conversation will cover a wide range of global political and economic topics, including international trade agreements, cyber-security and the impact of rising military tensions," says NBC.

"The annual conference will take place from June 1-3, 2017. The exact time and date of the plenary session will be announced in the coming weeks."

Kelly, who left Fox News to join NBC, hosts a Sunday night newsmagazine for the network beginning in June.

She will also take over the network's 9 AM timeslot Monday through Friday beginning in September and go up against ABC's 'Live with Kelly & Ryan'. Ryan Seacrest joined the morning show as its permanent co-host on Monday.