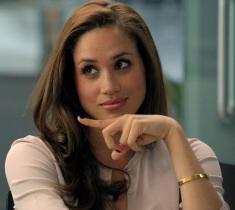 Markle, who is now officially engaged to Prince Harry, is leaving the series with production on the show's seventh season already wrapped up.

"From all of us at USA Network and Universal Cable Productions, we want to send our most heartfelt congratulations to Meghan Markle and Prince Harry on their engagement. Meghan has been a member of our family for seven years and it has been a joy to work with her. We want to thank her for her undeniable passion and dedication to Suits, and we wish her the very best," USA Network and Universal Cable Productions said in a statement.

Markle, who has played Rachel Zane since the premiere, will be written off the show after she marries Patrick J. Adams' Mike.

"She said she was just going out to get some milk," the actor joked. "Playing Meghan's television partner for the better part of a decade uniquely qualifies me to say this: Your Royal Highness, you are a lucky man and I know your long life together will be joyful, productive and hilarious. Meghan, so happy for you, friend. Much love."

In an interview, Markle said she didn't necessarily see it as giving up acting.

"I don't see it as giving anything up. I just see it as a change," she said. "It's a new chapter, right? And also, keep in mind, I've been working on Suits for seven years. We were very, very fortunate to have that sort of longevity on a series... I've ticked this box, and I feel very proud of the work I've done there, and now it's time to work with Harry as a team."

The seventh season of 'Suits' will premiere in early 2018.