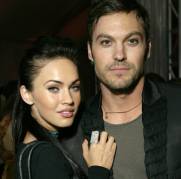 ) and Brian Austin Green are engaged to be married -– again.

The 36-year-old Green proposed to the 24-year-old former 'Transformers' star on June 1 while the couple was vacationing in Hawaii.

The duo, who have been dating since 2004, were previously engaged, although the engagement was called off in early 2009. At the time, a source their decision was called "mutual."

That didn't seem to affect their relationship for long, though, as the couple was spotted back out together soon after.

It's reported that Fox hasn't been sporting an engagement ring because, in all the excitement, she lost it right after the proposal.

"I saw her jumping up and down," a witness tells 'Us Weekly'. "Later, I saw a half dozen staff sifting through the sand. Security and maintenance staff spent a couple of hours looking for it. No one found it."