Megan Fox: Getting Fired from 'Transformers' Was 'Low Point of My Career' 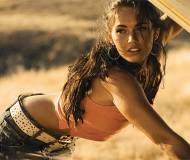 ) is opening up about getting fired from the 'Transformers' franchise.

"That was absolutely the low point of my career," Fox tells Cosmopolitan UK.

The actress was fired from 'Transformers: Dark of the Moon' and replaced by model Rosie Huntington-Whiteley after she complained in an interview that director Michael Bay "wants to be like Hitler on his sets" and he was "a nightmare to work for."

The hammer came down on Fox after executive Steven Spielberg told Bay to replace the actress.

Although Megan now believes the experience helped her realize the error in her ways: "Without that, I wouldn't have learned as quickly as I did."

"All I had to do was apologize — and I refused. I was so self-righteous at 23, I couldn't see that it was for the greater good. I really thought I was Joan of Arc."

"It hurt me and a lot of other people," she admits. "However, that darkness that descended caused enormous and brisk spiritual growth. Once I realized I brought it on myself, it was an invaluable learning experience, looking back on it."