McCarthy Returns As Spicer For Easter, Baldwin's Trump with Fallon's Kushner On SNL 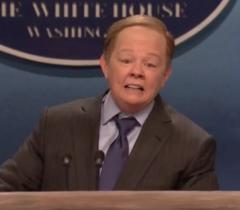 Fallon's Kusher wore a trademark blue blazer, sunglasses, and personalized flak jacket, inspired by the photos of his recent trip to Iraq.

In the skit, Baldwin's Trump turned to an 'Apprentice'-style firing session to resolve escalating tensions between Kushner and senior advisor Steve Bannon.

Going up against the son-in-law, Bannon is ultimately "fired" and escorted back to the basement, where he joins Kellyanne Conway.

"Jared, you're such an inspiration. You've shown that if you are born rich and marry my daughter you can do anything you want," Trump says before giving up his desk to Kushner.

"It would be really great if the nit-pickers would try to see the big picture and didn't focus on every single little slur and lie I say," says the actress as Spicer.