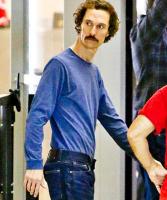 Matthew McConaughey talks to David Letterman about the drastic transformation that saw him drop to 135 pounds.

McConaughey said he used a portion control diet to turn into skin and bones to play a man who has AIDS in the upcoming film 'The Dallas Buyers Club'.

"That's 135 right there," the actor said as Letterman flashed a photo. "Not as much exercise as you think. It was just about diet and I had three and a half months to do it the right way. I ate decent meals... they were just small. Portion controlled."

"Well, the target weight started off to be 145 and by that point, coming from 182, my body knew we were going south. And my body was committed to going south."

McConaughey said he noticed a lot of difference being at the lower weight.

"Mentally, extremely acute. Almost hyper awareness to a clinical amount. I wasn't easy to live with at point because I was just scientific and clinical with my mind."

"Not eating as much food, your five senses, they turn up the notch, turn up the volume quite a bit. All my senses were extremely acute at that point. Needed three hours less sleep a night," he added.

As for whether people told him he was losing too much weight, McConaughey said: "I heard a lot of that. They thought I was doing it for the fun of it. No, actually, I have a job."