Matt LeBlanc Admits 'I Made F--k You Money' On 'Friends' 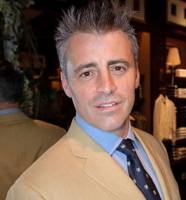 It's been nearly seven years since 'Friends' ended its run, so what has Matt LeBlanc been up to?

"I took four or five years off," LeBlanc, who played Joey Tribbiani tells 'Details'. "There were a lot of things that were spinning out of control. My daughter had been diagnosed with an illness, my marriage was falling apart, the writing was on the wall that the show was going away—that being the least of those three major problems."

"I was extremely stressed, and then it was all kind of poof!—quiet. So I said, 'You know, this is a good time to crawl under a rock'."

"I would get an offer or two a year to do network shows. Probably half a dozen things came across my desk that were big network commitments, and I would graciously say thanks, but no thanks. I had grown some roots on the couch. Thank God I didn't need the money. You know there's that saying that you make your f--k you money in Hollywood? I made that."

Asked exactly how rich he is, LeBlanc doesn't hold back.

"'Money is not an issue? What do you mean?' Everyone in my family used to work with some kind of tool in their hands every day. That's what we do. That's what I did before I got into acting."

LeBlanc says it was a little strange to be earning $1 million per episode by the end of the show's run.

"It's a little bizarre, because it's not like you can call your buddy and go, 'Hey, let's jump on the bikes for a week and ride to Colorado'. Because he'll say, 'I've got to go to f--king work, dude.' There are only five other people that have this thing in common with me."

"But it's like a hobby now. It's not work. It's like if nothing else happens, that's okay. I've been out of the limelight. I think a part of me was sort of craving normalcy. Maybe that's not really an option."

"Sure, sometimes you read a new script and it's like, 'What part? Oh, that part? This guy with the bad hip? Right. F--k.' But I'm absolutely fine with that. Friends was a time in my life that's over now. I'm 43 years old. Sort of reinventing myself, I guess."

Asked if that's why he's sporting the gray hair LeBlanc explains "I started going gray in my early twenties. I remember on Friends, in the very beginning, putting the stuff on the sides. Then it became a full shampoo job."