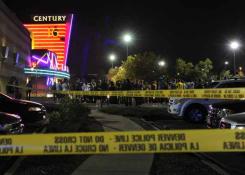 A masked gunman killed 12 people at the midnight screening of the latest Batman film, 'The Dark Knight Rises' in a Denver, Colorado suburb.

Forty eight others were wounded in the attack and ensuing commotion as the man hurled a teargas canister into the auditorium and opened fire on moviegoers.

The gunman had appeared at the front of the theatre, located in a mall, during the movie and released a canister before he began shooting.

One woman said her daughter told her shooting started just minutes after the film began.

"She saw the exit door open and something was thrown across the screen, and then shooting started," she said. "It was chaos."

CNN quoted another witness as saying he saw a "guy slowly making his way up the stairs and firing, picking random people."

"We heard anywhere from 10 to 20 shots and little explosions going on. Shortly after that we heard people screaming. Then they came on PA system and said everyone needed to get out."

"As soon as we got out, there were people running around and screaming."

The 24-year-old suspect, who has been identified as James Holmes, was taken into custody in the parking lot behind the theatre.

He was carrying a knife, a rifle and a handgun when arrested, with a second gun recovered from the theatre. He was also wearing a bulletproof vest.

Ten people died at the scene and four died later in hospital in what they are calling a "mass casualty incident."