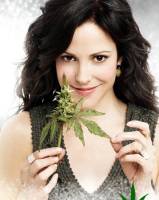 'Weeds' star Mary-Louise Parker tells Conan O'Brien how Bruce Willis took out a prop gun with blanks and shot a bee that was bothering her.

But instead of being terrified that Willis fired a gun near her face, Parker says she was turned on by the gesture.

"I asked him and he said 'Yeah, I shot the bee for you, babe.' It was hot!," she said several times during the interview.

"You're right. He is more of a man than me. I wouldn't shoot a live round into your face," Conan said perhaps not realizing the double entendre.