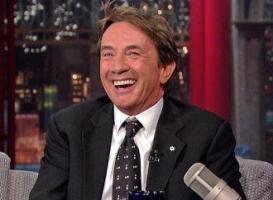 Martin Short tells Letterman about making an impression on the set of the film 'Clifford'.

Short didn't realize that his penis was hanging out of his boxers while he was getting his legs shaved on set while wearing a pair of boxer shorts.

He later asked the woman who waxed him later whether his penis was really hanging out, she replied: "I'll tell you this. If I had known you then like I do know, I would've shoved that thing back in!"