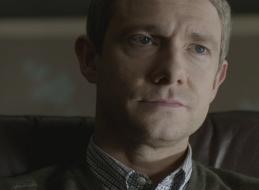 After he's shown some examples, Martin Freeman tells Stephen Colbert he's not turned off by the fan art depicting his Dr. Watson character and 'Sherlock' as more than friends.

"I did know that was going on," says Freeman.

In fact, the actor is so on his game that he delivers a Trump burn after Colbert takes a minor shot at the Royal family.

"Obviously the answer is I don't care about that," replies Freeman.

"Listen, that's nothing compared to what you're going to be in January," quips the actor.