Mark-Paul Gosselaar Reveals How Appearance as Zack Morris Came About 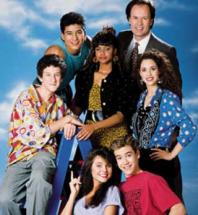 If you were a fan of 'Saved by the Bell' growing up, then Mark-Paul Gosselaar's appearance as Zack Morris on 'Late Night with Jimmy Fallon' this week was no doubt one of the most entertaining bits of the year.

But whose idea was it and how did it come about? The actor tells reporter Mike Ryan that he came up with the outline for the skit, just by chance: "It was my idea about a month ago to go on the show as Zack Morris."

"I didn't know how it was going to work out but my wife and I actually came up with the idea as we were headed away, just the two of us, on a weekend together and I didn't know how to get in front of the 'Saved by the Bell' reunion," that Fallon has been pushing. "I've never been opposed to the reunion but it's got to be, sort of, under our terms."

"If someone puts a gun to your head and says, 'You know, you should do this reunion,' like Fallon kind of has done -- and I love Jimmy by the way, I think he's awesome -- he kind of put us under the gun in a way. I wanted it to be a win-win situation for everybody."

"I said, as we were driving, to my wife, 'Hey Lisa, what do you think if I went on as Zack Morris and that was reality? That Zack is alive, Zack is me and I just play the character Mark-Paul Gosselaar."

"There were three things that I asked for. Number one: That I look into the camera and I do the time out. The phone was a big thing that I wanted to use as well. And playing 'Friends Forever' with The Roots. And that was it, that's all we came up with, then I called Jimmy Fallon. I said, 'Hey, Fallon, this is what I want to do.'"

"And he goes, 'Well, wait, at the end you're going to say you're Mark-Paul?' I said, 'No, I'm going to go on, never break character and that's going to be the reality.' He says, 'I don't know if the producers are going to be into that, but I'll get you in touch with my writer.'"

"They weren't sure because they've never had somebody just come on as a complete character and never say they were not the real person. So we weren't sure how it was going to work out and how 'Raising the Bar' would tie in. I worked with the writer, Mike Dicenzo, and told him, here's my idea."

"That's his script, it's 11 pages of his dialogue that he came up with. A lot of the credit goes to him, I just put the wig on and preform the character."

Mark-Paul says he isn't afraid to embrace his past work, like some actors are, because he believes it's all been part of his growth as an actor.

"I'm extremely proud of the work that I did on 'Saved by the Bell' and I'm extremely proud of all the work I've accomplished throughout my career. But for the most part, I don't want to disappoint my fans. I respect my fans and I respect the people that watch all my shows -- whether it be 'Saved by the Bell' or 'NYPD Blue'. I think it's cool musicians can always play their old songs and people expect them to play them."