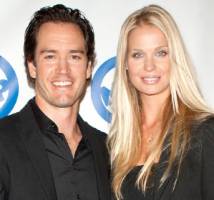 Mark-Paul Gosselaar is engaged, less than three months after his divorce was finalized.

The former 'Saved by the Bell' and current 'Franklin & Bash' star is engaged to advertising executive Catriona McGinn.

The 36-year-old proposed with a 5-carat-diamond ring to McGinn last week.

"Mark wanted to give Catriona her dream ring. He couldn't wait to propose," jeweler Neil Lane tells the magazine.

"He was so excited to have found the woman of his dreams."

Gosselaar was previously married to Lisa Ann Russell, with whom he had two children over 15 years of marriage.