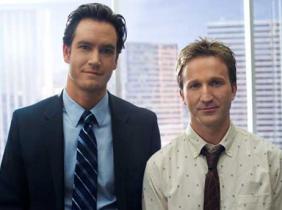 During an interview, Mark-Paul Gosselaar and Breckin Meyer slammed Gosselaar's one-time 'Saved By The Bell' co-star and his tell-all book.

In the book titled 'Behind the Bell', Dustin Diamond, who played Screech on the high school comedy, says he was an outcast, accuses the cast of "a certain smoke" from their dressing rooms and says Gosselaar regularly used steroids.

"Everything that I've heard about his book is negative and I don't remember those things," Gosselaar, who played Zach Morris, said.

"My experience on the show was very positive and that's why when people say, 'Oh, you don't like talking about it.' It's like, No, I don't mind talking about it, I just don't really remember that time, and also everything I do remember was extremely positive."

"That guy is such a d--k. I need to say it," Meyer said. "The Dustin thing is just so silly. It's just so negative and it always bums me out."

"I know Elizabeth, Tiffany ad Mario. Everyone has nothing but awesome things to say about it, except for Dustin. That might be you, bro!"

"I think it's bullsh-t. He's so full of sh-t like his sex tape! That's not him. He's not packing six Beldings beneath him. There's no f--king way. You're full of sh-t, Dustin!"

"Mark-Paul's new Screech is angry at the old Screech," he laughed.