Mark Wahlberg Prays God Will Forgive Him For 'Boogie Nights' 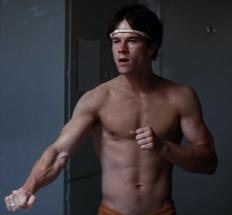 Ahead of an event with the Chicago Cardinal Blase Cupich, the actor told the Chicago Tribune that: "I just always hope that God is a movie fan and also forgiving because I've made some poor choices in my past."

When asked if he had prayed for forgiveness for any of his movies, Wahlberg immediately replied: "Boogie Nights is up there at the top of the list."

At the event he also once again spoke about prison sentence for the assault of a Vietnamese immigrant.

"It was a big wake-up call for me," he said. "A lot of people go to God when they get into trouble. When I heard the jail doors close behind me … I knew that was just the beginning for me."

"I feel remorse when I've made mistakes. If I could go back and change a lot of things that I did, I would. I look for ways to give back."

"I've never been shy about sharing my past and the bad decisions I've made and being affiliated with gangs, being incarcerated. So absolutely I think they can identify with me on a personal level, and that's why I've continued to try to do as much as I can to help young people."