Mark Wahlberg May Team Up With LeBron James For A Movie 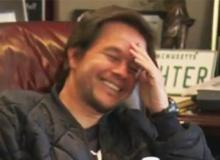 Appearing on the 'Tonight Show', Mark Wahlberg shares a photo of NBA star LeBron James working out at his large home gym and says they're discussing doing a movie together.

Wahlberg first assures Fallon there's no mirror in the photo and his home gym is really as big as it seems.

"It's actually a great idea," he then says of the possible movie. "It's based in and around the fantasy league so these guys go to all these fantasy camps and me and LeBron have a situation."

Wahlberg then goes on to talk about his burger chain Wahlburgers, saying he was initially against the idea because it would negatively affect his brand.