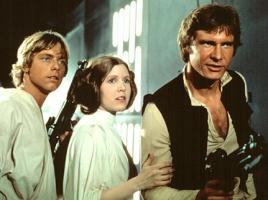 Mark Hamill says things got hot and heavy between him and Carrie Fisher while they were filming the first 'Star Wars' movie.

In an interview with The Guardian, Hamill says that although he "knew from previous jobs" that getting romantically involved with a co-worker wasn't a good idea, "Carrie and I were instantly attracted to each other."

"I remember one time – I'm sure alcohol was involved – we were talking about kissing techniques. I said: 'Well, I think I'm a fairly good kisser. I like to let the women come to me rather than be aggressive.'"

"And she said: 'What do you mean?' Well, next thing you know we’re making out like teenagers! We were all over each other!," he smiles.

"The one thing that drew Carrie and me back from the precipice was we kind of became aware of what we were doing and just burst out laughing."

Then in a TMI moment, the now 66-year-old actor adds: "Which was unfortunate for me because the rocket launch sequence had been initiated."

He said once that phase was over the pair "became like real siblings."

The late Fisher made headlines last year when she fessed up to having an affair with Harrison Ford while he was still married and starring in the franchise.